Part 1 of this blogpost, ‘She’ll Be Alright, Mate’ introduced Heather Bickford, Ratho Farm’s chef and my catering savior the night of our front-of-the-house triumph and back-of-the-house roller coaster Mardi Gras Dinner. We also went over catering lesson one: An intoxicated guest is one who will overlook or forgive mistakes.

2. Start at LEAST one full day before you think you need to 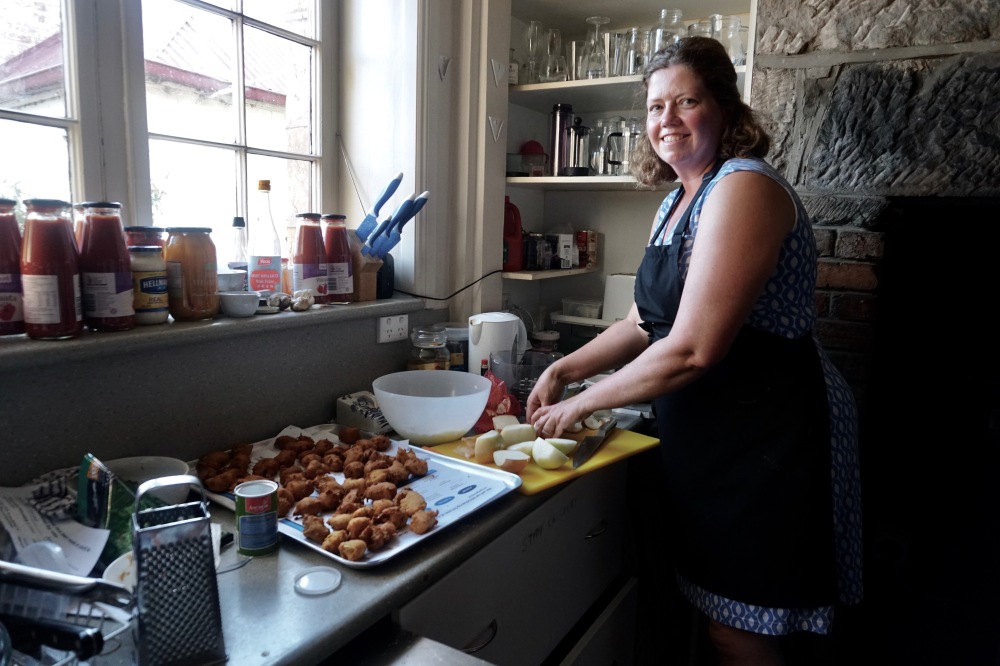 This photo of me prepping for the Mardi Gras Dinner shows a face that should NOT have a smile on it. To my left is the third of three appetizers, Okra and Fried Green Tomato Cornbread Fritters, about two minutes from being plated and passed to the guests on the veranda. In my hands are un-prepped onions which will go into the Tasmanian Seafood Jambalaya, along with the jars of tomato passata lined up along the windowsill and about fifteen other things. In other words, the only thing standing between me and needing to send out 10 fully formed, elegantly decorated and properly cooked Cajun rice casseroles are the time it takes to pass these appetizers (15m) and the time it takes to hustle everyone inside and serve them a cup of Chicken and Sausage Gumbo with Cornbread and Biscuits (30m). We missed the mark by somewhere between 30 and 40 minutes, for reasons that went well beyond not having a proper mis en place. Like the catchphrase it would later become at Ratho Farm, ‘Jambalaya’ will turn up over and over in the cautionary tales from that night. TLDR: Start prepping one to two days sooner than you think.

3. Everyone gets to eat, even surprise vegans

Given how restrictive the vegan diet is, I was continually confounded by how little time some people feel comfortable leaving between letting the kitchen know about this dietary restriction and the time they expect to eat. A heads-up to the chef is especially necessary at a not–really-a-restaurant like Ratho, which nightly prepares dinners, but typically just for their own overnight guests, who choose an entree when they check in. On the night of our four-course, six-dish Mardi Gras meal, for which people had to make reservations, we knew in advance about one gluten free, seafood-allergic guest and one 50th birthday diner who wanted a gluten free, nut free ice cream cake. But then SURPRISE, in the middle of what had already been a pretty chaotic and challenging dinner service, word reached us of a surprise vegan in the Atrium. He/she (I still don’t know) wondered whether we might be able to make them a vegan jambalaya. I replied immediately, confident that I knew the right answer to this question: “No. I’m sorry, we can’t. We can make them a vegan dinner, though,” I said, mentally inventorying what we could microwave from the stores that Heather leaves in the freezer for just such occasions. And this is where Heather jumped in and saved the day. “Carrie, do you still have some of the vegetables you used to make the jambalaya?” I saw her measure a cup of rice and some water I saw where she was going. We’d used chicken broth for the other jambalayas. Now we’re making a vegetarian one. Right. So I’m actually a very can-do person and Heather and I whipped up the Vegan-balay in no time. I remember saying to her “I can’t believe I almost gave up on that person,” and she said, “Carrie, everyone gets to eat; even surprise vegans.”

To Be Continued…. 2/? (I’ve given up guessing how long it will take me to work my way through this night’s long list of foibles.)