Coming up on four years after he shuttered his “encased meat emporium,” Doug Sohn remains a Chicago treasure. That will come to no surprise to the three hundred people who patiently waited in lines, some as long as five hours, to get one of the final red-basketed sausages at his beloved Avondale institution, Hot Doug’s.

Still, it was impressive how many times our brief interview at Wrigley Field was interrupted by fans and well-wishers. When I asked one of them to pose for a photo with him, Chicagoan Karen Vrdolyak actually thanked ME for the honor, and told me her friends minds would be blown if I sent her a copy. Such is the power of a well-made tubesteak.

“It’s awesome,’ Sohn said, holding no part of his smile back. “I keep waiting to become ‘Whatever happened to?’ but it hasn’t happened yet.”

These days, Wrigley is the last place in the city you can still lay hands on Hot Doug’s, from a stand on Platform 14 behind the Centerfield bleachers. At $10-a-pop, his three-sausage rotation changes each homestand. Doug still names them after people, but now they’re former Cubs players instead of celebrities.

I got the ‘Carlos Marmol,’ a baked ham sausage with sweet and spicy mustard and a refreshing pineapple salsa, namesake of a retired Cubs reliever from the Dominican Republic. 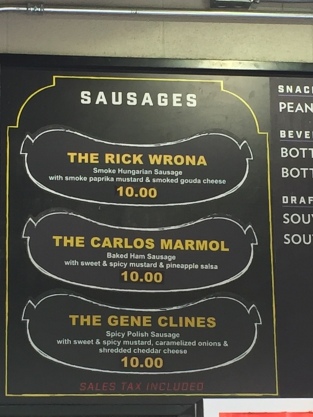 As a former Hot Doug’s regular, I can testify that the quality has not dropped off at all. It was texturally perfect, fluffy in a way, with that satisfying snap and juice explosion that comes from a natural casing and perfectly punctuated with salt against the sweet-and-acidic salsa.

“I am always looking to get a good balance of sweet and sour to go along with the salty that you are always going to have with any sausage,” said Sohn, who since 2015 has been creating menus at the start of each season. The sausages are crafted by the same vendors Doug used for his restaurant, and the stand run by his restaurateur partners, The Levy Group.

“My goal was to not run a restaurant anymore,” he said of life post-Hot Doug’s. Only because it was the Cubs calling did he allow himself to be coaxed out of retirement. Halfway through their negotiation, Sohn said, the Cubs mentioned he’d get a season pass for all the home games.

“I told them ‘You should have mentioned that up front; we could have ended this meeting an hour ago!”

2018 is an especially auspicious year for encased meats in Chicago. It’s the 125th anniversary of the ‘invention’ of the hotdog, a kosher beef frankfurter two Austria-Viennese immigrants sprung onto a deeply appreciative public at the Columbian World’s Columbian Exposition in 1893. 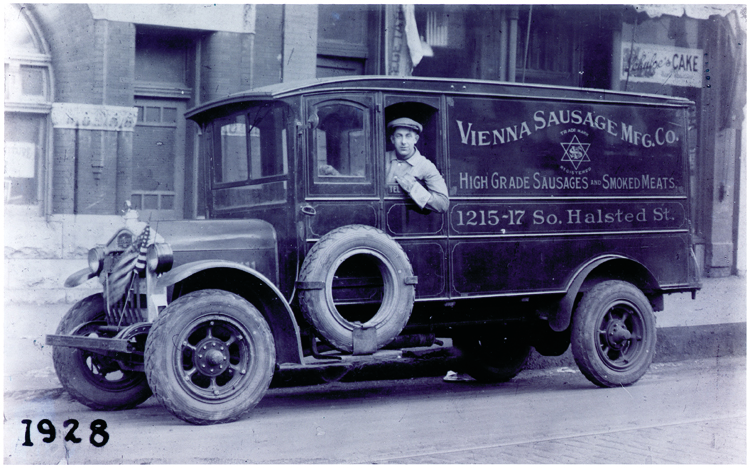 Their company, Vienna Sausage, would later become Vienna Beef, a powerhouse of the local business community whose kosher dogs, piled high with 7 signature toppings are one of Chicago’s most iconic foodstuffs.

history with the city and its sports teams. It’s free of charge and open from 11am to 2 pm Monday through Friday only, at the company’s factory store and cafe at 2501 N Damen Ave. Take your co-workers out for a char-dog and feast your eyes on several decades of Americana!